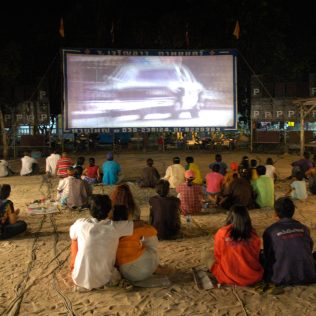 Hollywood might be known for making movies, but here, we also love to watch them and there’s nothing better than enjoying a movie outside in the beautiful Southern California weather. Luckily, in Los Angeles, the weather stays nice enough to be outside the majority of the year, and during the warm months you can find outdoor movie events happening all over the city. With movies being shown outdoors from Pasadena to the Pacific Palisades, there’s sure to be one near you. There are also movies of almost every imaginable genre being shown around town, so no matter what type of films you love, there’s probably somebody showing something you’ll like. From children’s movies to cult classics, there’s a little bit of everything shown at the city’s outdoor movie showings. Below, you can take a look at some of the movie showings around Los Angeles, during the spring and summer, this year.

This cult classic, set in the ‘70s, is being shown downtown at Los Angeles State Historic Park for the movie’s 25th anniversary. Guests scheduled to attend include Sasha Jenson and Wiley Wiggins.

Pretty Woman is almost a classic these days and where better to see the film than in the middle of the city where it was set and filmed? It’s showing at the Rooftop Cinema Club at Hollywood’s Montalban Theatre.

For many people, Selena is one of those movies that can be watched over and over. Documenting the tragic tale of the singer, it’s beloved by people of all ages and is showing at Exposition Park.

Catch the 2018 movie that has smashed box office records and taken the world by storm. Watch it at the Melrose Rooftop Theatre in West Hollywood.

Dirty Dancing is one of those movies that truly captures the feel of summer. See Baby come of age and learn to dance in this film about a 1960s summer retreat at The Ritz Carlton’s Summer Supper and a Show event.

This film about cheerleading may have come out almost twenty years ago, but it still holds up. See Torrance and the girls compete against a rival squad at the Street Food Cinema event in Griffith Park.

These showings are just the tip of the iceberg when it comes to local outdoor showings. A quick query will find you lists of showings all over town and even in the suburbs. Take advantage of the beautiful weather and catch an outdoor showing near you.

Whether you’re setting up a movie showing for a park full of people or getting a group together to go see one, make sure to check out our fleet of vehicles to meet your specific needs.